The Parish of Monasterevin is the largest parish in the diocese of Kildare and Leighlin. It is over 100 sq. miles. Monasterevin derives its name from the monastery of St. Evin. St. Evin arrived here in the 6th century. He came from Munster along with a large number of monks. They decided to build a monastery here because it was peaceful, the river Barrow was near by and there was plenty of forestry. The place of the monastery was known as “Rosglas” which means green wood. St. Evin wrote an account of the life of St. Patrick. St. Evin’s feast day is December 22nd. The monastery was attacked by raiders and lay in ruin until the 12th century.

The present building stands on the site of St. Evin’s monastery and of the later Cistercian Monastery. Moore Abbey House was built in the 17th Century. It is a large mansion built in the Gothic style. Many improvements were made by the Drogheda family who lived in the house.

The Sisters of Charity of Jesus and Mary bought Moore Abbey in 1945. Moore Abbey is now a home for intellectual disabilities.

Count John McCormack the great Irish Tenor lived in Togher House for a few years before he rented Moore Abbey House from Lord Drogheda. He lived in Moore Abbey from 1927 to 1939.

When John McCormack sang “Panis Angelicus” in the Eucharistic Congress in 1932 the Times Newspaper said that it was a day of a century.

The three storied houses by the banks of the Canal was once the Grand Canal Company Hotel. People travelling on the barges would use it. A bell would ring as the barges arrived, that was why it was known as the “Bell Yard”.

After the Battle of Monasterevin, Roman Catholic Curate of the Parish, Fr. Edward Prendergast was charged with complicity in the rising. He was Court Marshalled in Monasterevin House, Main Street, the home of captain Bagot the Yeomanry Commander, and forthwith hanged in the Captains gardens across the road. There were 214 well built houses along the main street.

A Monument was erected in his memory in 1900 in the Market Square.

In 1784 Monasterevin Distillery was opened by Mr. John Cassidy. The Cassidy Whiskey was the best in the country. The brewery was opened in 1860. In 1918 the firm went into liquidation, and in 1934 the distillery closed.

The Hulk, which was once a Charter school, was established in Monasterevin in 1759. After a seventy-year litany of cruelty and neglect, the notorious Charter Schools were finally suppressed by order, dated 3rd September 1828. The Hulk, a name evocative of the most heartless of cruelty – that to a small child.

The Aqueduct of Monasterevin carries the Canal over the River Barrow. It was built in 1826. The Aqueduct has three arches and is made of limestone from Mountrice Quarry. White iron bars are at the side of the Aqueduct.

The Drawbridge was built in 1826. The branch line was extended to Mountmellick in 1830. It was manually worked up until 1982.

The Metal Bridge was built in 1846. It is the longest railway bridge between Dublin and Cork. The first train driver to cross the bridge in 1846 was known as “Hell Fire Jack” for he said, “Now for Hell or Cork”.

Gerard Manley Hopkins the noted English poet who died in 1889 was a constant visitor to Monasterevin. He stayed in the Cassidy House and described their hospitality to him as “one of the props and struts of my existence”. A festival of poetry is held in the town every year in his honour attracting people from all over the world.

Advent, like its cousin Lent, is a season for prayer and reformation of our hearts. 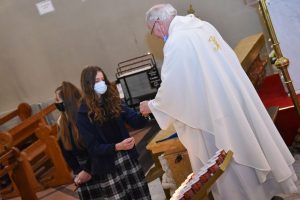 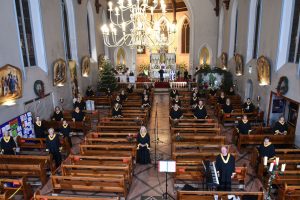 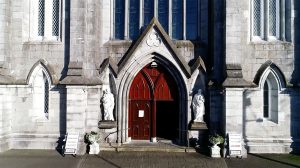